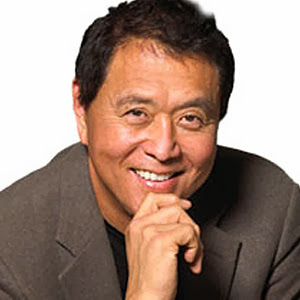 Robert Kiyosaki is a Japanese American entrepreneur and author of international best seller ‘Rich Dad Poor Dad’ .He was born in Hawaii. After high school, he graduated from U.S Merchant Marine Academy.Then; he joined the U.S. Marines as a deck officer in 1969 and went to Vietnam as a helicopter gunship pilot.
He returned from Vietnam in 1975 and became a salesman at Xerox Corporation. After three years,he started his own company.Unfortunately it went bank rupt. After struggling with Tshirt business,he incorporated Cashflow Technologies, Inc in 1985 and it became a success.Apart from running two successful business firms, Kiyosaki has also invested real estate,mines,stock market and precious metals.
He have published more than twenty five books.His books such as Cash flow Quadrant,Rich dad Poor dad,Guide to investing,Conspiracy of the rich and Increase your financial IQ are international best sellers

Kiyosaki Quotes
“In school we learn that mistakes are bad, and we are punished for making them. Yet, if you look at the way humans are designed to learn, we learn by making mistakes. We learn to walk by falling down. If we never fell down, we would never walk.”
“When times are bad is when the real entrepreneurs emerge.When I started my last business, I didn't receive a paycheck for 13 months. The average person can't handle that pressure.”
“I would say raising capital is one of the weakest things for most entrepreneurs.”
“It's not what you say out of your mouth that determines your life,it's what you whisper to yourself that has the most power!”
“I am concerned that too many people are focused too much on money and not on their greatest wealth, which is their education. If people are prepared to be flexible, keep an open mind and learn, they will grow richer and richer through the changes. Intelligence solves problems and produces money. Money without financial intelligence is money soon gone.”
“The single most powerful asset we all have is our mind. If it is trained well, it can create enormous wealth in what seems to be an instant.”
“I find so many people struggling, often working harder, simply because they cling to old ideas. They want things to be the way they were; they resist change. I know people who are losing their jobs or their houses, and they blame technology or the economy or their boss. Sadly they fail to realize that they might be the problem. Old ideas are their biggest liability. It is a liability simply because they fail to realize that while that idea or way of doing something was an asset yesterday, yesterday is gone.”
“Whenever you feel ‘short’ or in ‘need’ of something, give what you want first and it will come back in buckets. That is true for money, a smile, love, friendship. I know it is often the last thing a person may want to do, but it has always worked for me. I just trust that the principle of reciprocity is true, and I give what I want.”
“The size of your success is measured by the strength of your desire; the size of your dream; and how you handle disappointment along the way”

“Just know that it’s fear that keeps most people working at a job. The fear of not paying their bills. The fear of being fired. The fear of not having enough money. the fear of starting over.That’s the price of studying to learn a profession or trade, and then working for money. Most people become a slave to money…and then get angry at their boss.”  .